Refurbishment work began at the Peace and Happiness Garden, with the council clearing the overgrown beds and tidying the pathways in preparation for planting which started on Tuesday 14th March. Organised by St Anne’s in Bloom, this re-generation of the popular tourist spot, next to the pier, where the Les Dawson statue is,  has received much appreciated help from some of the staff of the Santander Building Society who worked alongside St Anne’s in Bloom volunteers and also Jo Wood and Amy Doherty of Fylde Borough Council.

Over a thousand plants have been planted into the newly cleared beds. The new plants were chosen by Jo Wood, the FBC Landscape Architect, to cope well with the harsh coastal conditions and incredibly sandy soil. They have also been chosen to provide long term colour in the summer months. 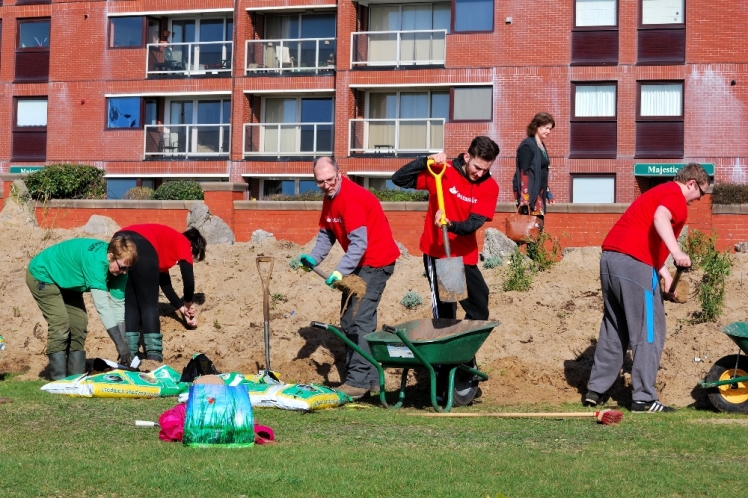 Once the plants were transported from the Ashton Gardens Depot to the Peace and Happiness Gardens, the volunteers worked really hard to plant them into the ground, especially the enthusiastic workers from Santander.

The money to pay for this refurbishment has been provided by the Tesco ‘Bags of Help’ scheme where the money raised from the 5p bag charge in Tesco stores is used to fund thousands of community projects. The plants were supplied by J. A. Jones in Southport.

If you are interested in which plants are suitable for our tricky coastal conditions, then here is a list of the plants that were used: